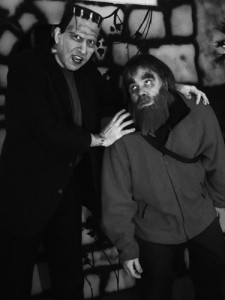 Paul (left) and Greg as the disturbing duo.
Photo by Laurie Starrett.

Thank you for reading our novella! After all, without readers, a story—even one that’s been published—goes untold. (“If a tree falls in the woods, and no one is there…”) Readers are the electrical current that, when applied to a diverse assemblage of stitched-together body parts, animates and vitalizes said form; because you have read, visualized, and so experienced what the two of us have written, we can justifiably point to our modest tale and say:

We certainly hope you’ve enjoyed our singular pastiche of humor, gothic horror, homage, parody, and quasi-historical fiction. (See, we told you it was made from diverse parts!) Perhaps you’re wondering where in Gott’s name such a bizarre story came from. There are two answer—one short, the other long.

The short answer is “From Leonard J. Kohl.” See the excerpt of his essay on the 1942 film The Ghost of Frankenstein that serves as this book’s epigraph (p. 11) and ends thusly: “Ygor, however, has managed to get the Monster cleaned up and gotten him a new suit by the time the weird- looking pair enters Vasaria.”

Upon reading these words, Paul decided to fill in the gap by writing the story of how and where the Monster obtains his new garb—“the gap” being located within the fade-in/fade-out at the film’s 0:08:42 mark. Paul also decided that this ne’er-before-told tale would be best told not by him solo, but in tandem with his friend of nearly 39 years and fellow now-grown-up “monster kid,” Greg—who, to Paul’s delight, quickly accepted the invitation to collaborate.

Which leads us to the long answer: This story came from our shared, nearly lifelong love of the hauntingly atmospheric and monstrously fun Universal Pictures Frankenstein movies of the 1930s and ’40s … and from a friendship, soon to enter its (gulp!) fifth decade, whose history merits a semi-brief recounting here.

“In the January 1974 issue (#104) of Famous Monsters of Filmland magazine, there was a small paragraph in the ‘Classif-Hyde’ ads which read as follows: ‘CLUB: For LON CHANEY JR. For fans 12 & under. Many benefits. For info write President P.C. McComas.’ Little did either of us know that this would lead to a long-term friendship that would produce a number of great projects, including this book.

“After writing to ‘The President’, I soon became a subscriber to his Lonny Jr. fanzine, the first of five eventual Macabre Publications (one of which, Conrad—devoted to actor Conrad Veidt—my friend Scott Merkel and I would put out on a semi-monthly basis). In December of that same year, my pen pal from distant Milwaukee came to stay at my house in Munster, Indiana, for several days, during which we made a short film together (as we were both budding filmmakers) called The Invisible Man Meets The Wolf Man. This really cemented our relationship, which continues to this day. There were indeed ‘many benefits’, as the ad stated, the best of which was getting to know someone who is now an old friend.”

“I paid tribute to my early friendship with Greg via the ‘Craig Starling’ character in my 2008 coming-of-age novel Planet of the Dates—but, as Greg says, our bond was not restricted to childhood; it’s still going strong.

“What’s more, with the addition of his wife, Laurie, and my wife, Heather, the duo evolved into a foursome. Greg and Laurie have been key members of my No-Budget Theatre (NBT) indie-film ensemble, lending their talents to seven installments (and counting)—on both sides of the camera. Most recently, the couple provided the premise, location, and make-up for (and also acted in) the ‘In Search of … Worm- Man’ segment of NBT #7: Gorzak’s Grab Bag (the script for which appears in my prize-winning 2011 Walkabout collection, Unforgettable). Greg and Laurie then proceeded to ‘knock it outta the park’ as Romulan Emperor and Empress Blagos in NBT #8: Time Trek.

“I’ve been able to repay the favor by serving as a voice actor in the Starretts’ own Veidt Radio Theatre ensemble; among other parts, they gave me the plum role of a still-alive-at-age-1,800-plus Marcus Aurelius! So, let’s see: Greg and I met through monster movies, then went on to make magazines, films, and radio plays together—but never a book. If only there were some way to address that omission…”

As you can see, it was all but inevitable that we join forces, ultimately, on Fit for a Frankenstein.

Once we did so, things went swiftly and smoothly. Paul began writing in mid-July 2012, just before midnight on—honest to God—a thunder-and-lightning-filled night. Numerous ping-pong-style volleys with Greg later (during which each of us provided valuable feedback on one another’s sections), we put the finishing touches on Draft 1 in mid-October—a mere three months after we’d started. Revision occurred throughout the process, with a bit more in November, and Voila! Fit was finished.

But it wasn’t always Fit. Initially, we “tried on” The Suit of Frankenstein, then the double-entendre-ready The Size of Frankenstein, but Greg—ever the stickler on this point—was concerned that both titles reinforced the widespread public misidentification of the good Doctor’s creation as “Frankenstein.” (The name, used properly, refers only to the scientist and his kin.) It was Greg who finally suggested Fit, which Paul embraced—and we never looked back. (Ironically, while our story depicts a good deal of tailoring, at no point does either the Monster or anyone else actually obtain a fitting.)

Given the relatively modest scope of a novella, it’s, uh, fitting (sorry!) that—aside from a guard dog, some forest fauna, and a few barnyard animals—only four actual characters appear in the book (not counting people about whom Ygor dreams): the Monster; his friend, Ygor, who is the star of our show; the tailor, Klaus Hauptschmidt; and Klaus’ young daughter, Gretl.

In the case of the first two, we were “channeling” existing film characters whom we both have known and loved for years—and were picturing, in the process, two specific actors. It’s hard to imagine anyone other than Bela Lugosi—who portrayed Ygor brilliantly in 1939’s Son of Frankenstein and again in The Ghost of Frankenstein three years later—playing that part; thus, as we put Ygor through his paces, writing new scenes and lines for him, we both very much had “Bela on the brain.”

Though Boris Karloff created (so to speak) the Monster by playing him/it to perfection in the first three films of the series, it was the bigger, bulkier Lon Chaney, Jr. whom we pictured in the role, since it was Lon who (rather stoically) played the part in The Ghost of Frankenstein—and the entirety of our narrative takes place within the timeline of Ghost.

And then there’s Klaus. We considered modeling the uptight yet lovable tailor on some noted character actor of the Lugosi/Chaney, Jr. era (Peter Lorre, Akim Tamiroff, George Zucco, etc.), but then went in the opposite direction and took our inspiration from the equally talented but contemporary actor David Hyde Pierce—specifically, from his four-time Emmy-winning work on the long-running TV show Frasier. This, as it turned out, worked like a charm; after all, who could possibly be more different from Ygor, or prove to be more flummoxed by him, than one Dr. Niles Crane?

Often, authors are asked, “What other books out there are like yours?” We’re proud to report that, to the best of our knowledge, there is nothing out there quite like Fit for a Frankenstein; indeed, that’s part of the reason why we wrote it! The novella is probably closest not to any other book, but to a movie: Mel Brooks’ hilarious 1974 parody/homage Young Frankenstein—though our Fit is (for the most part) less over-the-top, and it sticks a bit closer to the source material that Brooks and we shared.

Speaking of that source material, one of the bonuses of writing this novella was that it required us both to revisit, yet again, most of the classic Universal Pictures Frankenstein movies we’d first watched on TV in our youth: the “Ygor double feature” of Son and Ghost in particular, but also (for the sake of Ygor’s prescient dream in Chapter 10) the three films that follow that duo: Frankenstein Meets the Wolf Man (1943), House of Frankenstein (1944), and House of Dracula (1945). Doing so was like reconnecting with a bunch of beloved childhood friends. (The gorgeous musical scores alone—by the likes of Franz Waxman, Frank Skinner, and Hans J. Salter—made the “reunion” worthwhile.)

What’s more, in weaving our yarn—or, should we say, sewing our suit?—we managed not only to pay tribute to the Universal Frankenstein series, but to sneak in a few “lesser homages” as well. Surely, you caught the modified Abbott & Costello routine in Chapter 5 … but how about the Chaney Jr.-inspired Of Mice and Men reference in Chapter 2? Or the there-for-no-particular-reason snippet of tailor-/“Taylor”- related dialogue from Planet of the Apes that immediately precedes the first meeting between Ygor and Klaus? Frasier fans likewise will find a nod or three to their beloved sit-com. “Easter eggs,” the kids call ’em; happy hunting!

In addition, we’d venture that you just may have learned a word or svei of Deutsch along the way. (We did, anyway.)

And for all the numerologists (and superstitious folk) out there, consider: 13 chapters … 13-point type … 2013 publication. Beware of paper cuts—or, for you e-book readers, electric shocks—while turning these pages.

“But, wait; there’s more!” While collaborating on Fit, inspired by “old Ygor” and with Halloween fast approaching, we wound up reworking a portion of Chapter 3 into a stand- alone, non-Frankensteinian flash-fiction horror piece, “After the Fall” (a.k.a. “Living Ghost”), that immediately follows this Authors’ Note and closes out our slim volume with, we hope, a discomfiting shudder. Be forewarned: the tone here is darker than in Fit. “After the Fall” is best read alone, at night, by torchlight … at the base of a gallows.

In closing, we both hope you’ve enjoyed Fit for a Frankenstein, our tale of a great friendship between Ygor and the Monster. It was all made possible only through a unique series of events which began with a long-ago ad, placed in a long-ago magazine, resulting in another great friendship— and, ultimately, in this book.