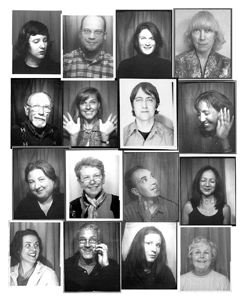 Jessica Bartlett grew up in Denver, attended school in Worcester, Mass., and now calls Chicago home. Her likes include tofu recipes, patterned socks, and blogging about interiors on her website, www.designboner.com. Her dislikes include aggressive drivers and stale tortilla chips (unless they’re smothered in cheese). She both craves and fears success as a writer.

Dennis K. Beard, a resident of Evanston, Ill., grew up in Decatur, Ill., graduated from Bethel College in St. Paul, made a living in the printing industry, experienced a little of this and that, and began to write it all down when he bought his first computer in 1985. So far, he says, no one has taken him seriously. Adds Dennis: “I’ve been retired for 12 years now. This is what I do to keep from going nuts.”

Emily Collins was born and raised in Evanston. She now lives in Massachusetts with her husband and two children. Emily would like to thank Paul McComas for his encouragement, Hugh for his support, and Will and Edward for providing inspiration.

Sarah Morrill Condry is very happily married to her beloved, Craig Condry. She is a stay-at-home mother of two beautiful children and numerous fictional delinquents. A founding member of AFW, she is currently focusing on writing children’s pieces as well as compiling her own collection of short stories, for which her piece in Further Persons Imperfect will be the title story. Other works can be seen in First Person Imperfect.

Brian L. Cox is a writer and filmmaker living in Evanston. He started writing while living in Nova Scotia, where he was born and raised. Brian’s story in this collection was inspired by a passion for peace and a deep sympathy and respect for all those who have lost loved ones to war. Brian is currently working on several creative projects, including a collection of short stories.

Drew Downing was raised in Michigan and attended Michigan State University. He now resides in Chicago, where he is studying creative writing at the University of Chicago. He has been a member of AFW since 2002.

Lauren Fath completed her undergraduate degree at Northwestern University, where she studied journalism and fiction writing. She is now pursuing an MFA in creative writing at Oregon State University, where she teaches English composition. Lauren’s favorite toy as a child was the hole punch, and she continues to be crafty in her (little) spare time by painting, bookbinding, and resurrecting the art of the handwritten letter. Among her creative influences are Milan Kundera, Mark Strand, Diet Coke, and the Czech Republic.

Barbara Ghoshal, a recent graduate of the Master of Arts in Creative Writing Program at Northwestern University, is working on a collection of personal essays tentatively entitled How Public—Like a Frog. Barbara works in the Weinberg College Dean’s Office at NU. She and her husband live in the Chicago suburbs and have four adult children.

Paul McComas grew up in Milwaukee, the setting for his comedic coming-of-age novel, Planet of the Dates, to be published by The Permanent Press in February 2008. He wrote the short-story collection Twenty Questions (Daniel & Daniel, 1998), now in its third printing, and the novel Unplugged (John & Daniel 2002); edited this anthology’s predecessor, First Person Imperfect (iUniverse, 2003); and is co-authoring the science-fiction novel Logan’s Quest with William F. Nolan, author of Logan’s Run. An Evanston resident, Paul performs, lectures and teaches widely; the other contributors to this collection are current and former students in his private Advanced Fiction Writing workshop. Paul has a secret crush on one of the other authors.

Eva Karene Romero is from Minnesota, Paraguay, Iowa, Chicago and, most recently, Tucson. She is a graduate student in Luso-Brazilian and Hispanic American Literary Studies at the University of Arizona, aspiring to one day become a musty old white-haired professor who carries enough clout to bring her Chihuahua to class and employ her spouse as her personal assistant. In the meantime, she explores Tucson and the surrounding areas one misadventure at a time in her “Arizona Places” column at bookmans.com and in her blog, tucsonquerido.com.

Elizabeth C. Rossman holds MA degrees in both Writing and New Media Studies from Chicago’s DePaul University, where she is director of the Supplemental Instruction program. She contributed two stories to First Person Imperfect and has been a member of AFW since 2002. “Product Placement,” her story in this collection, is excerpted fromWard, a novella-in-progress. Other current writing projects include “spending more time working on short stories and finishing a longer juvenile-fiction piece.”

Lori Rotenberk fell in love with words at age four; they, along with her dogs, have been her “most loyal companions.” Lori has been a journalist for 31 years; her work, which has included both national and international reporting, has appeared in the Boston Globe, the New York Times, Newsweek, the Chicago Tribune, the Chicago Sun-Times and numerous magazines nationwide. She resides in a “nearly-woodland” Evanston cottage.

Long ago, Heather Swartz attended the University of Kansas and received BA and MA degrees in English. More recently, she completed pharmacy school at the University of Wisconsin. She works as a Senior Medical Writer for a Chicago-area health-care company, lives in Evanston with her two cats and is 100% thrilled to be included in this collection. Heather has a secret crush on one of the other authors.

Moira Sullivan was born the oldest of eight on the South Side of Chicago. She has lived in Illinois for her entire life, except for brief stints in Wisconsin and Brazil. She has worked as a translator (Portuguese-to-English) and is currently a marketing communications specialist. A resident of Evanston, she helps organize the local Open Mic at Cafe Express. Having traveled inner space for many years, she is just now recounting her adventures.

Marie Thourson is a native Chicagoan who holds an administrative job in higher education. Known for her sublimely-parsed memos (ranging across the “instructional,” “uplifting,” “cautionary,” and “ominous” sub-genres), she recently sold her bag of passive verbs on eBay and turned to fiction. In an earlier life as a political scientist, she wrote about public policy in academic journals.

C.J. Ullrich grew up in Plymouth, Wisconsin, and now lives in Madison. He spent four years in the US Marine Corps, where he learned the value of a college education. Following his discharge (Honorable, if you’re wondering), he spent several years stubbornly resisting the inevitable, but eventually enrolled in school, obtaining an Associate degree at the University of  Wisconsin–Sheboygan and then a BA at the University of Wisconsin–Madison. He would like to thank his family and friends for their love and support over the years.