Following are the beginnings of the stories in First Person Imperfect. The copyright for each excerpt is held by its respective author: © 2001 for “Dig and Drive,” © 2003 for all other stories.

Sarah Morrill Condry
Out of the Lobster Tank

I have this piss-ant little job down at the Lobster Shack. It’s attached to Chicka-Dees, which does a hell of a lot more business than we do on account of people would just rather eat chicken or drive to Point Judith and get lobster fresh off the boats than eat the three-day-old we practically have to keep on life support around here….

The War of Northern Aggression

My brother was running down the dirt driveway with his backpack swinging off his shoulder, the dust from his pounding feet swelling up toward the enormous umbrella of century-old oaks that lined the drive. I could hear Buddy’s faint shouts between his steps. He tripped and almost wiped out, then he was up and running toward me like a boy on fire….

She sat on her suitcase, waiting for a taxi. Even from this distance I could make out the bag’s faded floral brocade. When I was a child, those pinks and oranges and greens had provided endless fascination, and I had traced them over and over with one chubby finger and all the single-mindedness of a four-year-old. Looking over at her now I felt my throat close….

Reflection (excerpted from an as-yet-untitled novel in progress)

Fall leaves skittered off the tall front windows, swirling into the foyer as the jangle of bells announced each customer’s arrival at Sara’s Café. Truth be told, it wasn’t a café at all, but rather a restaurant that the owner had chosen to describe as a café in order to attract the type of clientele drawn to the quaint and the faintly romantic….

2/1 — False Start
The school is putting out its first student-writing compilation this year, and I mean to be a part of it. (Hello, my 80-year-old-self! Probably the only one who’ll ever read this notebook…) I will glean from my meager adolescent existence something grand….

After eighth period, I shove my Social Studies book into my locker and pull a bag of Combos from the top shelf.
“Hey, Niel.” Megan’s voice is so darned soft.
I scan the hall to my right, then turn to her. “’Sup, Meg.” I slam my locker and flash my cheesy smile….

Paul McComas
Dig and Drive (originally published in The Awakenings Review Vol. I, No. 2 [Winter 2001])

It’s Tuesday morning, quarter to 11, and we been called out to lay some replacement pipe at this house on Pulaski. The folks who live there are moving out, and I guess there realtor said to get the gas line fixed because otherwise she can’t sell the place. Anyway, our Machine Op’s on another job, so we get out the shovels and dig the holes by hand….

…but please don’t judge me till you’ve walked a mile in my platforms.
You see, while the mid- to late-’70s disco craze was widely viewed as the last word in mindless conformity, for me it signified the opposite. In our lily-white, upper-middle-class suburb, and particularly at Hyper-Homogeneous High, disco — with its roots and popularity in both urban black and blue-collar-white culture — was scorned for reasons more ethnic than aesthetic….

I dig my fingers into the dense wool pile of the living room carpet and wiggle the tips to leave ten holes. Then I turn one hole into a “hi” dot and two others into eyes. “Don’t draw on the carpet!” calls Mom, rapping the wooden spoon twice on the edge of the pot.
We are having goulash for dinner as soon as Dad gets home….

How to Worry About Your Father

I take a brisk lunch-time walk to feel hungry and fresh — and to forget that my Dad is having night sweats again, my mother may be having an affair, and all I have in my life is work, late-night cab rides home from the office and aimless walks when I can find the time for them….

“Hi, Amanda. Hope I’m not late.”
The deep, friendly male voice belonged to an equally appealing male body. I peered through the open door at the tall, dark-eyed guy standing there. Italian, or maybe Cuban, dressed in jeans and a nice linen shirt. Yum.
He raised his eyebrows, smile dimming a little. “I’m Mitch?”
OK, Katie-girl. Time to think fast….

“Shhh…Go back to sleep.”
I keep my voice low — the words are meant only for myself. In her snowdrift of sheets, she sleeps on undisturbed.
The soles of my feet are numb against the cold floor. I stand, shivering in the cobalt light of predawn, and steal some moments to watch her breathe….

My coif is enviable — strangers stop me on the street and ask about the long strawberry curls. But my mom? She can’t see it. She’s still focused on years of chasing me around the house with a fine-tooth comb, trying to excavate some non-existent ’do from my tiny little head….

I arrived in New York on a dark and stormy day. All right, that’s not true; I don’t remember what the weather was like. God, I hate that about myself, my total lack of accurate recall. You know those people who remember the details of everything? Well, I am not one of them. Maybe my life would function more smoothly if I were….

“Pure Magic.” That’s what’s printed in black ink letters at the top of the square of cardboard the socks are wrapped against. The cellophane is flaky and yellowed. It’s probably pretty old, like from the 1950s. It’s hard to know what color the magic socks really are…. 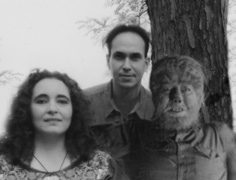 Some people say it’s pretty weird to love monsters. They say that God could only love good people who do nice things. But I think that is wrong. Why do I think that? I will tell you.
In almost every case of when you have a monster it is not their fault. Monsters do not choose to be monsters….

Eight or nine years ago, when I was in kindergarten, we lived at the end of a cul-de-sac surrounded by the thick, green lawns and giant elm trees of a typical suburban midwestern neighborhood. The cul-de-sac was paved with a fresh coat of thick asphalt that glistened under the summer sun. On especially humid days, the asphalt would shift under your feet and leave gooey black stains on the soles of your shoes. The kid that lived next door, Pete Wallach, told me one afternoon that if you stood on it for too long without moving, you’d start to sink, and the asphalt would suck you up like quicksand….

The locker room smells kinda funny, and I think the fat kid on the bench next to me might have something to do with it. He’s bent over, trying to stick his pale, doughy legs through a pair of old ratty-looking gym shorts….

It’s odd. I love sycamore trees. I should hate them, really.
I’ll tell you why.
When I was a boy in Wheeling, West Virginia, I had a friend named Joseph. Joseph Seidler. He came to Wheeling when he was seven t live with an aunt, and we met in Miss Thurston’s second-grade class. Joseph told me his mother was in a sanatorium for “two-boy-sclerosis.” I didn’t know what he meant; I figured she was crazy. That’s what I thought sanatoriums were for.
Joseph would come to my house after school to play spy-man….