Competing for the Ursa Major Awards in two categories:

The wide expanse of the universe stretches out in blackness, swirls of intergalactic dust, and pinpoints of light that blink the stories of billions of unknown stars, planets, and moons. Space is infinite and eternal, a source of endless questions, strangely silent in its majestic mystery.
And yet… 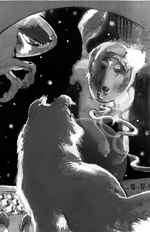 The scientific world, and then the world proper, had been stunned twelve months earlier, when ultra-high-frequency radio signals from light-years away had relayed an audible message of greeting and good will to Earth.
A message punctuated with barks.
First Contact had been made not by humanoids, it appeared, but by a race of alien dogs.
The nations of the world mobilized and conferred. At a U.N. conference, it was agreed that a rendezvous mission should be mounted—and that it should be “manned” not by Man, but by his best friend.
Various breeds were tested for intelligence, stamina, loyalty, and the ability to resist licking their loins in the face of crisis; most failed miserably. Greyhounds nearly made the final cut, but as pilots they were prone to going full throttle right out of the gate. Border collies were the runners-up: they proved plenty smart and dedicated, but their high energy level suggested that they simply wouldn’t be able to stand the confinement of space travel. (Also, at the testing site, they tried—with some success—to herd a pair of flummoxed Pentagon officials.)
The standard collie breed, however, passed with flying colors, albeit colors that they, as dogs, could not accurately see. From thousands of applicants, there emerged three unusually bright specimens—so bright, in fact, that unconfirmed rumors of human-gene splicing and/or brain-tissue grafting quickly ran rampant. The dogs themselves—a mixed- breed male and two purebred females—took umbrage at such talk . . . yet thereby succeeded only in fanning the flames, for whoever heard of a dog taking umbrage?
The male, thirteenth clone of a remarkably perceptive collie/greyhound/shepherd/husky mix named “Pono” (Hawaiian for “Goodness”), was chosen largely for his industriousness and keen directional sense; he was trained to serve as the ship’s navigator and engineer. The younger female, being uncannily social, vocal, and—yes— verbal, was slotted into communications, and also was instructed in basic veterinary practice. And the older (i.e., four-year-old) female—a quick-on-her-paws combat veteran and career bomb-sniffer who had bravely risked her own life, time and again, to save the lives of others—was the obvious choice for command.
Of course, designing and building a spaceship, and all of its equipment, specifically for canine use required something of a paradigm shift for the folks at NASA. The interior had to be fully oxygenated to allow the collienauts to go without helmets, for in test runs with the headgear, the trio’s frequent panting instantly fogged up their glass face-screens. In addition, Earth’s gravity was replicated inside the cabin, in part for comfort and in part to keep the sojourners’ kibble and Tang inside their respective bowls.
As for the Cerberus—whose blueprint was developed in consultation with the collies themselves—it was, in a word, unique. To the standard space-shuttle body was appended an elongated, tapering, snoutish nose-cone at the bow, as well as a jointed, tail-like rudder apparatus to stern that aided in course stabilization via a back-and-forth “wagging” motion.
At long last, eight and one half months after first contact: launch day at Cape Canaveral.
The ship was ready; the equipment was ready; the crew was ready. But—was the world ready?
It would have to be. For its fate now lay firmly within a dozen padded paws.

“Look, ahhh, you are heroes, each one of you.”
Belle’s ears prick up: I know that voice. She lifts her head sleepily, peers through blinking eyes at the monitor. Sees the familiar and handsome human face.
“And we are all with you three: Michelle, the girls, Bo—especially Bo—and I . . . not to mention our nation. After all, there’s not a human America and a canine America; there’s the United States of—”
“WOOF!” Belle bounds to her feet and straight toward the conn. “Out!” she half-whispers, half-snarls.
Minka bolts.
Belle leaps into her chair, then quickly composes herself. “Mr. President . . .”
“Ah, Captain Belle.” A broad smile. “I was hoping I’d have the honor of speaking with you.”
“The honor’s mine, sir.” She shoots a glance apiece at her crew mates “I’m just sorry no one around here saw fit to inform me . . .”
“Look, every leader has the occasional, uh, skirmish with staff. Why, earlier today, Joe Biden said the damnedest . . .”
The signal flutters; it cuts out, in, out again.
“Mr. President!” Belle points a brusque paw at Minka. “Get him back!”
“I’m trying!” the tri-color yelps, desperately punching control buttons with her nose.
“Equipment malfunction?”—this from Clono-14, padding over for a look.
Minka shakes her head. “All systems fully functional. It’s something else.”
The navigator turns back toward his captain. “I think I know.”
Belle leans forward. “So?”
“The entry point. We must be near.” He tilts his head toward the view screen. “That ringed planet over there’s the marker.”
Belle nods firmly. “Acknowledged. Prepare for entry, everyone.”
“Uh . . . actually,” says Clono-14, “I have to go.”
“Go? Go where?”
“You know.”
Minka, likewise, turns toward the commander. “Me too.”
Belle rolls her eyes; she mutters, “In the name of Saint Bernard. . . !” Then, more loudly: “There’s no time. Just ‘go’ in a . . . an empty supply box or something, would you?”
The other two draw back from her as if slapped. Gasps Clono-14, “What are we—cats?”
“All right, then; take your space walk—but make it quick! I’m not gonna see this mission botched by your baby bladders. Am I clear?”
In unison: “Yes, Captain!” And off they bound.
Gazing after them, Belle shakes her head … but her ears flatten back in concern. Once they’re out of the vessel, she knows, Clono and Minka will be on their own; if trouble should arise—as it well may—their captain will be unable to help. Belle heaves a worried sigh as she recalls the old saying: “In space, no one can hear you bark.”
A minute later, Belle watches her now-helmeted and -tethered (not “leashed,” as Sam once called it) subordinates float past the aft porthole. “What the hell?” she grumbles—then realizes they’ve headed for the one place that’s out of camera range. Belle raises a paw and flips the switch to activate their helmet mikes: “No time for modesty, people—just get it done.”
The reply voice is Minka’s: “You’re not helping!”
Clono-14 finishes quickly, then shuts the airlock-drop-chute in the rear of his suit and (dog-)paddles toward the open bay doors. Within seconds, he’s back in the shuttle, pawing his way out of his helmet and then re-joining Belle on the bridge.
“What is she doing out there?” demands the captain.
The male shrugs. “I dunno. Want me to go fetch her?”
“Mr. Clono, I’ll thank you not to use the ‘F word.’ It’s offensive.”
“Even when we use it with each other?”
Finally, the tri-color saunters in.
“Ms. Minka, to your post.”
The younger bitch complies, mumbling, “At least out there, no one’s barking out orders.” Belle’s hackles rise slightly. “None of your mouth, young lady.” Then, to the male: “Mr. Clono, what’s our position?”
“Nearing the planet’s outermost ring; wormhole imminent.”
Minka’s head jerks around. “Ringworm?” Her eyes are wide with fear.
“No,” Belle says evenly, “he didn’t say ‘ringworm.’” Then, sotto voce to the mutt: “She had a bad case as a pup. Lost a lot of hair.”
“Oh.” He turns to Minka. “Sor—”
But Clono-14 has neither the time nor the voice to finish his apology, for at once they are sucked into the wormhole. The reverberating ship barrels through an ever-unfolding wrinkle in the space/time continuum, twisting and turning, spinning like a top, speeding and slowing and speeding up again.
Belle clenches her jaws tightly. If NASA’s calculations are correct, she reminds herself, this passageway should lead them well-nigh within piddling distance of the Canis constellation, the Sirius system . . . and the Dog Planet.
Ideally, she thinks, in one piece.